Amphetamine is an addictive drug and, especially when abused, can cause a person to form the habit of continuing to take it even when it begins to harm them. Commonly abused as a prescription stimulant that is meant to treat ADHD and other disorders, amphetamine has many signs and symptoms that point to abuse and addiction.

Commonly, someone who is addicted to amphetamine will make taking the drug their number one priority. They will: 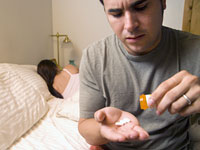 Lying about your amphetamine use is a sign of addiction.

The binge-crash pattern of abuse is very common among amphetamine addicts. The user will take the drug for several days in order to prolong its effects, usually not sleeping or eating much. Then, according to CESAR, “When binge episodes end, the abuser ‘crashes’ and is left with severe depression, anxiety, extreme fatigue, and a craving for more drugs.”

According to the NLM, people who abuse prescription amphetamine will often “believ[e] things that are not true” or become “unusually suspicious of others.” This, coupled with the mania that can develop when a person is chronically abusing amphetamine, can lead to toxic psychosis, a condition that is similar to schizophrenia. When a person exhibits this behavior all the time, this is a symptom of chronic, highly severe amphetamine addiction.

There are also many physical symptoms that point to amphetamine addiction. For example, someone who is constantly abusing amphetamine will likely experience malnutrition. The drug suppresses appetite which can cause weight loss and, over time, will lead to malnutrition and its consequences.

Other physical symptoms of amphetamine addiction are:

When someone becomes addicted to amphetamine, they will not be able to stop on their own. They will continue to seek out more of the drug, no matter what potentially dangerous or harmful actions they must take in order to obtain more. The most common and telltale symptoms of amphetamine addiction are: