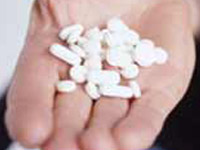 Heavy amphetamine use can lead a serious addiction problem.

Heavy amphetamine use can lead to a number of complications and potential dangers. These relatively common medications that are found in ADD and ADHD drugs such as Adderall are considered stimulants that will keep the user awake and alert for long periods of time.  Amphetamine use can lead to addiction and over-use or heavy use of amphetamines can cause an increased risk of heart attack, stroke or death.

The most pronounced dangers of heavy amphetamine use are related to the psychiatric changes which occur when these drugs are used repeatedly.

Some of the psychiatric dangers of amphetamine use include:

These are just a few of the dangers associated with heavy use of amphetamines.  Unfortunately, the ways that amphetamine use affects each user will differ quite significantly and there’s no real way to know how an amphetamine will impact your life before you take it.  This is what makes these drugs so dangerous, especially to those who choose to take them recreationally.

Overdose can trigger an irregular heartbeat and this may never go away, even after the individual recovers (if he or she recovers) from the overdose and stops using amphetamines.  There are also dangers associated with the blockages of the blood vessels by toxins associated with the drug.  This blockage can lead to additional cases of heart attack, stroke or other organ failure hazards.

Heavy use of amphetamines can lead to what is known as speed induced psychosis.  This means that the user will have symptoms that are similar to that of schizophrenia and may suffer from hallucinations, delusions and a completely paranoid state of mind.  In some rare cases, the psychosis that the user suffers from will never turn around which means that even after he or she stops using amphetamines there is still a permanent psychosis that causes them to think irrational thoughts, act irrationally or otherwise show odd behavior.